Case Studies: Meet some of the cyclists who have recently joined the club

Cycling background:  I always had a bike but didn’t cycle that much, just on holidays or commuting to work.  I used to own a road bike in my teens but I didn’t ride seriously.  Previously I wasn’t very interested in joining the club as I was already playing tennis and doing a fitness class; I was also worried about road safety.

Why she joined the club:  I saw how much enjoyment my husband had from cycling and I was keen to go on some of the cycling trips and holidays. I was eventually reassured and encouraged by another cyclist in my family about the safety aspect.  I bought a new road bike to join the club with.

Why she enjoys the club: The club is so welcoming, friendly and encouraging. On my first ride we went up Therfield Hill which I really struggled with. I didn’t think I’d make it but another member dropped back with me and talked me through it. I don’t enjoy the hills but there’s always someone encouraging me that I can do it. I like that people offer tips on technique which I welcome as a new rider. The social aspect of the group is good too, with summer BBQs as well as the longer Saturday Special rides which include a café stop.

Cycling goals…  I am going on the Majorca cycling holiday this year so I need to get my fitness and strength up to cope with the longer rides and hills. I am hoping to attend my first Sportive this year too.  I would also like to master getting up Therfield Hill, hopefully the club’s spin class will help me improve.

Cycling background:  Before joining I’d been road riding most weekends for the past few years and had taken part in a small number of cycling sportives including London to Brighton (night ride, twice!), Ware’s Cambridge and the Hertfordshire 100.

Why he joined the club:  I took the plunge and joined the club in October 2018.  There’s probably a couple of reasons really, but close to the top had to be about the social aspect of the club.  I’d been riding regularly but it was often solo.  I’d seen the RCC riders regularly and they were always friendly, waving as they rode past.  It looked a lot more fun to be part of a group!

What he enjoys about the club:  Definitely the social element.  Chatting while you ride, a coffee together after and the open and welcoming nature of the group make it very rewarding.  But I’ve also found the challenge of riding together in a close group at a set pace to be such an encouragement.

Cycling goals…  Firstly fitness. I want to improve my general level of health and then maintain it.  Also the challenge of the long ride.  Achieving a distance you wouldn’t or maybe shouldn’t think possible by bicycle.  Last year I achieved 100 miles in a day for the second time ever.  I also took part in the Hunstanton weekend away which saw me clock up 180 miles in a weekend. For both of my goals, I have been accompanied by other riders wanting to achieve the same.  It really helps your motivation when you are not doing it on your own. 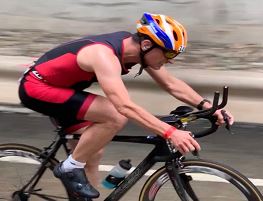 Cycling background:  I have cycled most of my life.  It’s mainly been for enjoyment and a way to keep fit, but I’ve also raced in my younger years, and also been on some quite long cycle tours across Europe.  Most recently I started triathlon last year and have, somewhat foolishly, signed up this year for a couple of half Ironman events.

Why he joined the club:  I joined the club in November 2019.  I was looking for a club that had a good well attended regular weekly club run and a good friendly and inclusive atmosphere.

What he enjoys about the club:  The weekly club run is definitely the thing I enjoy the most about the club.  It is really well run with something for everyone – there are typically 4 groups on the Sunday ride ranging from entry level to the fast group and so you can chose how hard you want to push yourself.  For those who have limited time, the structure of the club run is also really good with the cafe stop coming at the end of the 2 hour ride rather than mid-way.  That way, if you are short of time, you can head straight home after the ride, but when time allows you can join for the post ride coffee at The Bull.

Cycling goals:  My main goal for this year is to improve my cycle endurance and time trialling ability.  For my triathlon events I need to be able to do a 90km time trial and then still be able to run a half marathon. At the moment I am half dead after the 50-60km club run, so I have a long way to improve!!!